Until two weeks ago, I had never unfriended anyone on Facebook. Then, with three clicks on the keyboard, I was no longer "friends" with three people.

It wasn't a hasty decision. At first, over a year ago I unfollowed them because of their blatantly-rude behavior. Even so, their posts would occasionally appear on my wall. Over the past six months or so, their posts changed. Their tone became more strident, more condescending to those who disagreed with them. They began picking fights, raising controversial off-topic points in response to other people's posts. I became increasingly uncomfortable but did nothing.

Nor was it, in the case of one of the individuals, an easy one. Even though I'd known all three since junior high, we had only been acquaintances at best. But I'd become friends with one of them over the past 18 months, and in some ways I hated to  sever our Facebook connection.

And it definitely wasn't because we disagreed on fundamental and, to me, very important issues. I have more than a few friends with whom I am diametrically opposed on almost every issue. They are not only Facebook friends, but I also "follow" them and look forward to reading their posts whether or not I agree with what they have to say.

So why did I unfriend them?

This past fall, the three individuals began treating those who disagreed with them on political and social justice issues with a level of disrespect that was appalling. For example, in response to a former classmate who posted on his own wall his view on a particular issue, one of the individuals made a very personal attack, viciously referencing the former classmate's academic difficulties 40+ years ago.

They also began belittling and mocking other posters' spiritual beliefs. Snide comments, outright ridicule, and crude statements were quite common.

One night it occurred to me that I would never dream of being friends with these individuals in "real life". Their hypocrisy (demanding tolerance and understanding of their beliefs while not extending it to others who believed differently than them), as well as how they treated anyone whose beliefs differed from their own would cause me to avoid them at all cost.

Why then, I asked myself, was I continuing to be "friends" on social media? 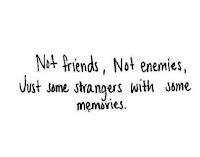 Social media friendships can be a thorny issue, and everyone has to make their own decision as to how to deal with "friends" who consistently don't act like friends.

I've decided, though, that I will no longer hesitate to unfriend an individual who bullies other people, who disparages another individual's beliefs, who makes personal, vicious attacks.

Was my decision to unfriend those three people the right one?

What do you think? Do you remain social media friends with individuals with whom you would not be friends in real life? If not, what does it take for you to sever a virtual friendship?