I think I hold the record for the longest time taken to choose a new couch.

If you don't believe me, take my picture to any furniture store in the southeast quarter of the great state of Missouri. Sales associates in every one will no doubt remember me. 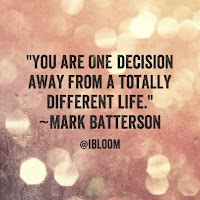 On the other hand, I almost purchased a new car without even test-driving it, and I would have if it hadn't been for a salesman who was horrified by the notion!

In the past eight-plus years, I've made snap decisions, appropriately-considered decisions, and ridiculously-overthought decisions. I've made some great decisions, some that have proven to be just fine, and more than a few that I shudder now to think of.

Making decisions is a routine part of life; experts say we make hundreds of them daily without a conscious thought. But making decisions when the fabric of your life has unraveled becomes for many people a seemingly insurmountable task.

Used to discussing options with a spouse or parent, for example, or against the backdrop of a job or based on long-established physical capabilities, making even the smallest decisions after a significant loss can be difficult, even daunting.

Trust me, I know.

Through many "opportunities" and lots of trial and error, I've learned that there are eight things that should be done when making a decision.

1. Prayerfully consider the decision facing you and all the options. You're not a religious person? You don't  believe in God? I respect your personal beliefs. But whatever your faith system, employ its practices when making a decision.

2. Know your priorities and make decisions based on those priorities. For example, my #2 priority is my family, more specifically my adult son and daughter and my relationship with them. As a result, as much as I have always wanted to live near the ocean, I've chosen not to relocate and to instead stay here, smack-dab in the middle of this great country, within a four-hour drive of both of them.

3. Ignore the so-called experts. Or at least take their advice with a grain of salt. You may have been told by well-meaning friends or read in highly-recommended texts that you should refrain from making major decisions for at least six months, preferably one year, after a significant loss.  You may not have that option. Even if you do, it may very well not be a wise one. If you are now rattling around in a house far bigger than you need and can afford or physically manage, it may be wise to sell now rather than later, for example.

4. Avail yourself of reputable experts who have nothing to gain from your decision.  No, #4 does not contradict #3. Consult with professionals -- financial advisors, tax professionals, counselors, etc. -- who you respect, who share (or at least understand) your values, and with whom you feel comfortable. Share your circumstances with them and ask for their recommendation(s) regarding the decision you are facing. Then consider, but do not allow yourself to be ruled by, their professional recommendation.

5. Surround yourself with trusted and supportive family and friends who respect you and your values & priorities. People who love you and aren't afraid to speak truth when you need to hear it. Talk over decisions and options with them to the extent that you are comfortable. You don't need to tell them all of your business; share with them as much as you are comfortable. Just as with the experts, consider their input as part of the decision-making process.

6. Use a process that works for you. You might be a pro/con list-maker. Perhaps you, like me, prefer to talk and journal about the decision.

One dear friend blocks out time, turns off her electronic devices, lays down on her bed, and mentally walks through each option, considering her own thoughts and the recommendations of trusted professionals and friends. She imagines the possible outcomes, picturing each one in as vivid detail as possible, considering worst- and best-case scenarios and everything in between. She shared with me that she finds herself almost physically drawing away from some options and eventually drawn to one more than the others.

Another friend walks. As he laces up his sneakers, he very deliberately focuses on something other than the decision facing him. He puts in his earbuds but doesn't turn on any music; rather, he uses them to deter other people talking to him. As he walks he focuses on nothing but what is around him and what he is experiencing and feeling in that moment. He told me that walking helps me clear his mind of clutter, allowing the best answer to become apparent.

7. Once the decision is made, you may want to take baby steps and consider the outcome of each step before proceeding. Don't be afraid to change course slightly or completely as an outcome unfolds (go ahead, return the coat!). On the other hand, you may be a jump-in-the-pool-cannonball-style type of person who prefers to make a decision and then live with it. Whatever your style, do something.

You'll make mistakes. Oh, I can almost guarantee you that you will make lots of them. That brings me to my last lesson learned.

8. Learn from your mistakes without beating yourself up over them or becoming consumed by regret. Mistakes were part of your old life; they will be part of your redesigned life. Face it -- mistakes are inevitable. Make them, deal with them, and get past them as best you can.


Lest you walk away from this post thinking I have the decision-making process down pat and that I never feel like I'm facing Mount Everest when a decision needs to be made, let me assure you that isn't the case. I'm a work in progress. Sometimes I follow these eight steps smoothly and without a misstep. Other times . . . well, let's just say I lose my way a bit before finding my footing.

Oh, about the couch. I eventually found one that I loved (and recently passed on to my daughter when it didn't fit well in my current home). I ended up not buying the car; I wonder if that salesman ever regretted talking me into that test-drive. As for the coat, I kept it and disliked it more every time I wore it. After a few weeks I had it cleaned and then donated it to a gently-used coat drive at work.

What strategies do you find helpful in making decisions? I'd love to hear about them or about your own decision-making experience(s). Join in the community by sharing a comment!