That means we are half-way through pumpkin spice everything.

We are also just 13 days away from adorable little costume-clad children and pre-teens wearing a football jersey or their mom's housecoat  ringing our doorbells in shy but almost giddy anticipation (on the part of the younger ones) and faux "I'm-actually-too-cool-for this" nonchalance (on the part of the pre-teens).

I despise anything and everything pumpkin spice. As a result, I face the first part of the month in a state of resignation, knowing that social media is going to go pumpkin-spice crazy; that flavors I can normally find in bakeries and coffee shops will temporarily be replaced by pumpkin-spice everything; and  that friends and perfect strangers are going to take it upon themselves to prove to me that pumpkin anything smells and tastes good (their efforts have and always will be futile, so save your breath).

On the other hand, I love trick-or-treaters, so I plod through the pumpkin-spice madness that is early October,  finding solace in the fact that around mid-October, I will begin to see social media posts with pictures of costumed offspring and grandchildren primed for trunk-or-treat outings.

But something else happens at the mid-point of October, something that brings me joy despite the overpowering smell of pumpkin.

It's the knowledge that it's almost NaNoWriMo time!!

NaNoWriMo is, for those of you who have never heard of it, held every November. Starting at 12:01:01 on November 1st, thousands and thousands of (otherwise sane) people all around the world will endeavor to write a novel of at least 50,000 words. They will exist on little sleep and lots of fast food & caffeine; they will eschew their normal activities like eating out with friends, watching TV, and bathing; they will write in the bathroom, while at stop lights, and even call in sick to work or school; and they will, come heck or high water, churn out an average of 1,667 words per day in their quest to complete the NaNoWriMo challenge.

I plan to participate again this year, after taking off last year due to my job and my duties as a class sponsor and, subsequently, supervisor of the concession stand at approximately one billion volleyball, junior high basketball, and high school basketball games. Okay, maybe there weren't a billion games, but almost.

Anyway, not only do I plan to participate in NaNoWriMo 2018 -- I am downright excited at the prospect.

I have the beginnings of a plot in mind and will do some some necessary preliminary research this week. Pre-planning and research is allowed by the rules. Yes, there are rules. This is a civilized endeavor.

Well, I guess I should say it's civilized through, say, November 5. After that, depending on the level of writer's block and resultant stress over the rapidly-approaching deadline of midnight on November 30, the refinements of normal life begin to fade. And truth be told, they're completely thrown to the winds around November 25.

NaNoWriMo is an often maddening  occasionally frustrating but exhilarating experience. Even people who had never dreamed of writing a book until hearing about this novel-writing frenzy and saying, "What the heck -- I'm in!",  can be heard to say after November has passed (and they've eaten an actual meal, taken a shower, and slept for a week) that it was a fantastic experience.

Why don't you join us? If you're even remotely intrigued, don't take my word for it; visit the official site https://nanowrimo.org and browse through the resources, discussion groups, etc. 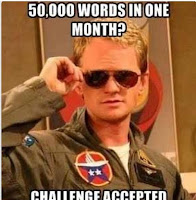 It's less than 2 weeks to NaNoWriMo -- bring it on!