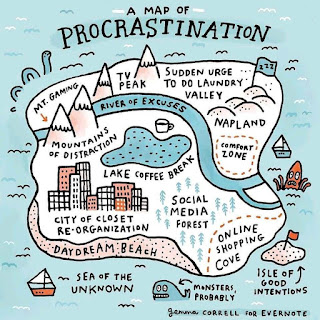 I did laundry and cleaned the house. I called friends and asked if they needed help with anything. I began not one, but two exercise programs. I watered plants and bought weed and seed for my yard. I wrote emails and knitted. I reorganized my files and wrote overdue letters. I wandered around on the internet looking for Christmas gifts (hey, I always shop early for Christmas!).

Finally, though, I got to work. The task was simple: write and submit a 5-page, no more than 1,500-word excerpt from a (mine, of course) novel in progress; the sample should include dialogue and be properly formatted.

A clearly-stated and quite simple assignment; unfortunately for me, simple doesn't necessarily mean easy.

Perhaps it should have been. Easy, that is. When I initially told a few friends about the assignment, each one of them, in their own way, dismissed it as the proverbial piece of cake. They all assumed I would sit down and produce at least a reasonably-good excerpt for the practicum I've signed up for at the Blue Ridge Mountains Christian Writers Conference next month.

Each of them knew that writing has been a key component of existence my entire life. Depending on how long or how well they know me, they were aware that I began reading before I even started kindergarten and that I began writing around the same time. They know that I kept a journal throughout my childhood and teen years and off and on since then. They almost surely know that I hold a Bachelors Degree in English and a Masters in English with an Emphasis in Composition. They even probably realize that I've done some free-lance writing and been published -- and paid for it!

And here's the icing on the cake. They know that I have spent my entire career teaching writing. Yes, writing.

Lifelong writer + multiple degrees in writing + a career teaching writing should equal the ability to sit down in front of a laptop one afternoon and write a 1,500-word writing sample worthy of submission to a writing workshop.

A few years ago, though, I decided to {drum roll} focus on writing a novel.

Don't say it. I've heard all the jokes and (sometimes) snide comments about the stereotypical English teacher who thinks they're going to write the next Great American Novel.  Besides, that's a topic for another post.

The novel hasn't come as easy as I'd hoped it would. There are a variety of reasons, some of which are probably more excuse than reason. But I decided when I retired last May that the time had come. It was time for me to put my fingers on the keyboard and write a book.

Fast-forward to last Monday, 8 days ago. With a week to go before my submission was due, I was forced to get to work. The novel was (is) still a work in progress, but that was okay; all I had to do was choose an excerpt to submit. That took about 30 minutes.

I spent a couple of days polishing. I revised and revised, and then I revised again. I revised so many times that I could recite chunks of dialogue from memory. Then it was time to edit. I proofread over and over, checking for errors in subject-verb agreement, parallelism, and so on.

By Friday, all that was left to do was submit the excerpt. Instead, I reassumed the role of procrastinator extraordinaire. For almost 3 days, I did a masterful job of pretending I had no assignment, no deadline to meet.

Sunday afternoon, though, less than 2 days before the submission was due, opened an email, attached the document, and hit send.

My award-worth career as a procrastinator was finished. 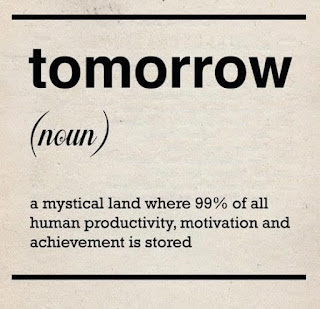 It's never been my intent that this blog be nothing more than a monologue. Instead, I hope you'll join in the conversation by sharing your thoughts and ideas via a comment. Thank you!