Mended: Restoring the Hearts of Mothers and Daughters (Review)

When I first learned several months ago that mother-daughter team Dr. Helen McIntosh and Blythe Daniel (respectively) would be releasing a book about restoring the very-unique relationship that exists between mothers and daughters, I immediately contacted Daniel and asked to serve on the book's launch team. I was chosen and received an advance copy of the book in exchange for my unbiased review, which I am sharing here and on amazon.com and other sites. 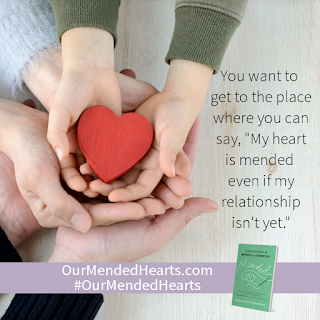 I was intrigued by this book for two reasons. First, my relationship with my own mother (who passed away in 2010) was, as many mother-daughter relationships are, a complicated one. I hoped that McIntosh and Daniel might address coming to terms with issues that remain unresolved due to circumstances such as the death of either the mother or daughter.

I was also interested because I am the mother of a daughter and the mother-in-law to my son's wife. The two relationships are, of course, very different, and I hoped that the book would provide insight into what I can do so that both relationships remain as strong and healthy as possible.

Mended far surpassed my hopes. Before I go into further detail, though, I want to stress that this book is not just for those looking to heal a broken or strained mother-daughter relationship. This book is for anyone that is looking to better an "okay" relationship or maintain an already-strong one.

Equally exciting to me is that the information in Mended is relevant to all relationships, not just that between mother and daughter. Work relationships, those between friends, husbands and wives -- all can be strengthened and healed by the application of the principles and practices discussed in Mended.

McIntosh and Daniel address a variety of topics related to healing or building a mother-daughter relationship. Some of those topics include: choosing to be "right" or choosing to be in relationship; knowing when and what to say; choosing words of reconciliation; offering advice; resisting the urge to control and change the other person; and working through difficult things together.

The book is written from the alternating viewpoints of McIntosh, who holds a EdD in Counseling Psychology, and her daughter, Daniel. Daniel is an author and literary agent. The book is greatly enriched by their honesty and transparency as they recount their own experiences as mother, daughter, grandmother, and granddaughter.

Another strength of this book is the authors' reliance on Scriptural truths as the framework for their discussion. That said, readers who shy away from "Christian" books should not do so. Mended is neither preachy nor heavy-handed, and it is not a book about doctrine.

I read prolifically, 5-10 books a week, and from time to time I come across a book like Mended. A book I wish I could buy at least 100 copies of and give to people I care about. A book I would love to lead a group study of. A book I know I will read time and again and that, even when I'm not reading it, nuggets from it will come to mind frequently.

Mended is a book I hope you will read. For you, for your relationship with your daughter, and yes, for the relationships you have with those around you. 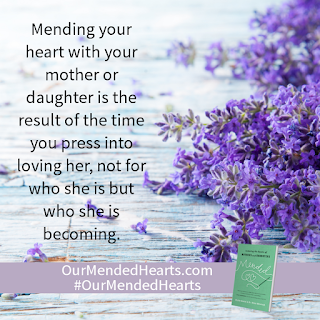