That image -- all those books in one place -- makes me smile. I love books, books, and more books!

That's why I was so excited back in December to find not only 1, but 2, Facebook reading challenge groups. Both had a list of categories — book published in 2020, book by author whose last name begins with the same letter as your own, etc. One challenged readers to read 52 books, the other was a challenge of 56 books.

Throughout January and the first half of February, I enjoyed reading books, posting what I’d read on the appropriate fb group, and reading about what others had read. And then, as if the proverbial switch had been flipped, the once-congenial, book-centered conversations on both fb groups changed.

First, someone shared that for the category of biography, they’d read one of a famous American Christian. In less than 2 hours, there were 163 comments by other group members, 159 of which were negative — even mocking and condemning — in nature. There was very little discussion of the book itself, as had been the norm in the group; instead, the comments were all directed at the idea of reading a Christian book, at Christianity in general, etc. When, finally, a few of us attempted to turn the conversation back to the topic of the book itself without responding to the vitriol, the moderators closed comments.

A few days later, another member posted that she was uncomfortable reading a book in which LGTB relationships were the focus. That poster faced a barrage of comments that ranged from amazement at her close-mindedness to comments wishing horrible physical consequences for their “hate” and lack of tolerance. Again, when a couple of people bravely admitted they were also uncomfortable with that category, the moderators stepped in. This time, one of them reminded members that “tolerance” and “open-mindedness” was a hallmark of the group.

I contacted the moderators of each group privately. I explained politely that I respected their right to have whatever categories of books they chose, but that I hoped that next year, just as there were categories such as “New Age” and “witchcraft”, there would be a challenge that was Christian-focused.  I explained that since, from the comments on the thread about the biography of a Christian, it appeared most participants were not Christian, that would indeed be a category that required participants to step outside their comfort zone. Or, better yet, simply broaden all categories so that they were challenging but more neutral.

I  heard back from both moderators. Both indicated that categories such as those I mentioned would not be included because some participants might be offended and because they do not want to “push any agenda”. Hmmmm . . .

I didn’t bother to respond. I merely left both groups and continued the challenge on my own.

But the whole experience made me sad. Sad that in a community of people who love to read, who want to challenge themselves to read beyond their normal genres and outside their usual preferences, the majority of participants was unwilling to do so. Perhaps even worse, the overwhelming number of readers who were championing tolerance of others vilified anyone who did not conform to their philosophies and worldview. 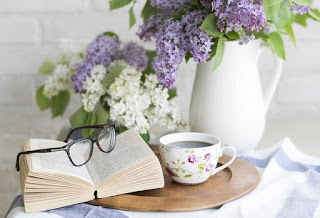 I’ve thought of starting my own fb reading challenge in 2021. A group with categories broad enough to challenge participants and encourage them to try new things *without* forcing them into specific philosophies or world views. A group in which members focus on the books and are respectful of those who disagree with them.

I’ve been jotting down and ideas and have created a fb “page” (not yet public). I hope you’ll consider joining!

I’m curious. What categories would you like to see included in a (book) reading challenge?

If you're interested in being part of the challenge, follow my author page on FB (Patti Miinch). I'll be sharing information about the group in late November.