Last week, an author shared on social media that they received an email from a new fan. It wasn’t an “Oh, I discovered your book and loved it; I am going to buy every one you have ever written or will write in my lifetime” missive. Instead, it was an “I bought your book at the dollar store and loved it” message.

The author stated that he/she was “miffed” and didn’t know if they should be offended because that’s all the public thinks his/her book is worth and other thoughts along those lines.

I responded that it all depends on an author’s motivation for writing in the first place. Others responded with similar comments, but there were a few people who said they would be miffed as well and that they would not be happy if their hard work was not valued any more than that.

After reading that discussion, I thought I’d share here why I have chosen to be in the “writing business” (as a teacher and later professor of composition, as a paid columnist, as a free-lance writer, as the author of a textbook for which I receive no royalties on any sales, as a blogger, and now as an as-yet-unpublished novelist) since graduating from college just over 40 years ago. 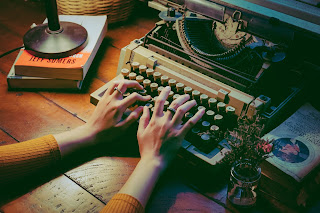 First, I write because I am absolutely passionate about the craft of writing. I could expound on this for pages, but in short, I absolutely love (and I use that word intentionally) every aspect of writing prose of almost any kind.

Second, I’ve always know that whatever writing skills and talent I have come from God. I’ve never thought otherwise. But it wasn’t until fairly recently that I realized that my love for the craft was not accidental; instead, it was instilled by Him as well. As a result, it would be wrong (the Bible clearly says so) not to follow that strong pull and/or to not utilize those gifts.

That’s it. That’s why I write.

You may have noticed I didn’t mention that I write in order to be published or to earn money.

Oh, I hope to someday have a book published and to maybe have a little “fun money” as a result, but do I expect either to happen? Not really. I don’t even think about that.

I write because I can't not write.