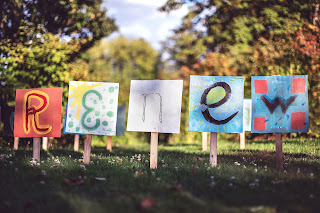 As 2021 drew to a close and I began considering my “one word” for 2022, it became increasingly clear to me that renewal was the perfect choice. I was excited and envisioned starting out the new year strong, creating checklists and action steps in my bullet journal. I could almost see the old habits, behaviors, and routines being replaced with better ones. Ones aligned with my values and goals.

That’s not quite how things panned out. Instead, I spent the first 79 or so days of 2022 preparing for, getting through, and then settling in from my 3rd move in 27 months. I’ll spare you the gory details; trust me, it was stressful.

Renewal was never far from my mind, but I thought of it as being on the back burner, waiting for me to have the time and energy to give it my attention. Because, after all, I was the one whose responsibility it was to determine the new habits, behaviors, and routines; I was the one who needed to implement and maybe fine-tune them as well. Right?

But yesterday, while I was rocking Little Little (my youngest grandchild), it dawned on me that the past 9 1/2 weeks did not put renewal on hold; rather, they had been instruments of renewal.

And I’d had neither the time nor the energy to focus on renewal, much less take a single step in that direction.

While I was looking elsewhere — at packing and finding an apartment and setting up utilities and . . . — routines and habits were stripped away and behaviors have been changing.

I felt as if a huge weight had been lifted from me. I finally got it.

I don’t have to figure it all out and create a meticulous plan.

I’m not sure yet what I need to do, but I know Who is in charge of that, and He’ll let me know in His own time.

And I’ll be ready to listen and to obey.

Email ThisBlogThis!Share to TwitterShare to FacebookShare to Pinterest
Labels: one little word, one word, renew, renewal