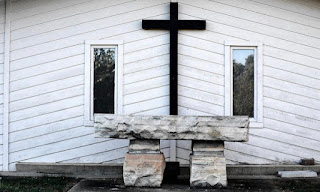 I decided that for Lent this year I would give up criticizing/judging others and that I would spend 15 minutes sitting silently (outwardly & inwardly) in God’s presence.

The results were not what I anticipated.

I tend to judge other people, particularly in two respects. I know it’s wrong, but it’s become a knee-jerk reaction, and I thought I would fail miserably at not judging other people for 40 days. I was wrong.

Because I knew the “issues” (for want of better word) that most commonly cause me to judge, I was able to implement strategies that helped me be more aware of my reactions and not slip into judge-and-jury mode. Most importantly, before entering situations in which those issues typically occur, I physically paused and reminded myself to not only refrain from judging but to be accepting and loving instead.

I also avoided situations that typically raise the Judge Judy in me and, when I had no other choice, made a point to not notice certain things.

And while I slipped occasionally, I was able to stop judging/criticizing other people almost entirely.

I failed miserably at sitting silently in God’s presence for 15 minutes every day. I didn’t even make it 10 days. My mind raced, I fell asleep (yes, I was sitting up in a chair with a low back, but I still nodded off), and I forgot — first one day, then another, and . . .

1. I can be less critical, less judgmental, and it’s worth the effort to continue being intentional in that regard.

2. I do want to learn to sit in silence with God, but (for me, at least) 15 minutes was too ambitious of a start. I’m starting today with 3 minutes. Yes, that sounds so easy, but I’m telling you — it isn’t!

I’ve given up something for Lent for many years now, but I can honestly say my Lent 2022 preparation has been the most impactful. It was a time of reflection and of renewal as I prepared for the blessings and joy that Easter bring.

I hope that wherever and however you celebrated this year, you and your loved ones had a wonderful Easter!