Wherever I’ve lived over the past 30 or so years, I’ve put up hummingbird feeders and bird feeders. I don’t know much about birds — the migration habits of various species, how to identify them, etc., nor do I really want to. Maybe you can relate when I say that too much of my time is already filled with things that must be analyzed or evaluated or studied: which probiotic is best, which car should I buy, which insurance plan is best for my needs . . .

Thank goodness our lives are also filled with countless things — birds at a feeder, a sunset, our grandchildren at play, the ocean, the smile of a dear friend — that we can simply appreciate, enjoy, and give thanks for. 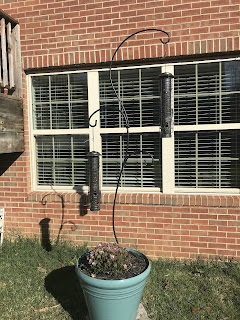 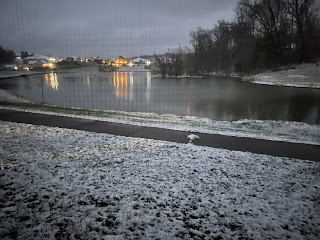 This was the view from my bedroom window at 6:15 this morning. If friends’ facebook posts are any indication, I’m in the minority when I say that I was not at all pleased to see the white stuff.

It’s not that I don’t like snow; rather, I don’t like the cold temperatures that are necessary in order for it to exist.

And so I puttered around my apartmentette all day — in my pajamas and slippers, no less. I rearranged several pieces of furniture, watched college football, read, and wrote a few letters.

It’s been a wonderful day, white stuff and all!

Email ThisBlogThis!Share to TwitterShare to FacebookShare to Pinterest
Labels: cold, Let it Snow — Not, snow

To blog or not to blog? That question has plagued me for a couple of years. I love to write, but the whole blog idea seemed somewhat contrived to me. After several months of prayerful deliberation, I’ve decided to return to the roots of blogging (think way back to the early 90’s) and approach this place on the web as a “personal diary”. I plan to write a brief entry several times a week, but bear with me if from time to time I carry on a bit or only post once a week. 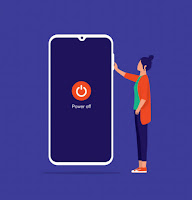 Sitting in a local tea shop this past Monday, waiting for a friend who was running a bit late, I decided to clean up my phone.

I decided to delete any apps I rarely/never use and knew I never would. That took care of 7 or 8 apps.

But what kept catching my eye was the blue square with the white lower-case “f”. My go-to when I’m bored or am trying to avoid doing something I know I should be doing.

That felt so good that I got a bit cocky. I deleted Instagram and Pinterest as well!

I thought I’d miss being able to access social media when I’m away from my ipad (which still has social media apps), but 5 days in, I don’t. Not even a bit.

I’m enjoying utilizing those little bits and bobs of time I used to spend looking at my phone to  people-watch or appreciate the natural world around me, to talk to God, to do nothing at all. To simply be. I should have done this a long time ago!

This old adage, from a tale about a frog trying to get out of a deep well by climbing its stone wall, may be something you can relate to. I know I can. Early this year, for example, I experienced two quite large steps forward in my life. Four months later several significant issues -- financial, health, etc, -- arose.

I fell back on old habits of of thinking I had to control everything so I could fix the problems and of trying one thing and another, resulting in either no change at all or in matters worsening. I developed an upper respiratory “thing” — five long weeks of coughing, congestion, and nearly-sleepless nights that left me physically depleted. Emotionally, I was at my lowest since my husband passed away. 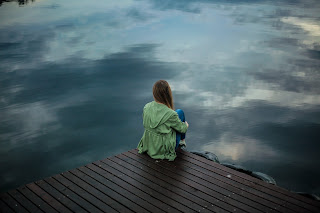 Thankfully, I was reminded of sound principles I had been ignoring and began putting them into practice: daily Bible study, daily meditation and journaling. One issue showed some improvement but wasn’t resolved. The financial issue and health issue remained virtually unchanged.

What did change was my perspective. I felt at peace, confident that I was doing what I should be doing and trusting God to do what He knew was best.

And then, last week brought another trial. The six-month-ago me would immediately have begun scrambling, trying to figure out how to fix the problem. 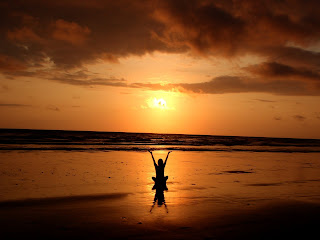 Instead, I'm doing nothing, completely at peace with the fact that it's not my place to control or attempt to fix a single thing. It's taken several decades, but I've finally accepted that when trials arise, my job is to simply be submissive and obedient to God.

And I consider that one gigantic step forward.

Can you relate? Maybe you’ve also experienced the “two steps forward and one step backward” phenomenon or have come to some realizations and made changes in your life. I’d love to hear your thoughts via a comment below. Thank you for stopping by!